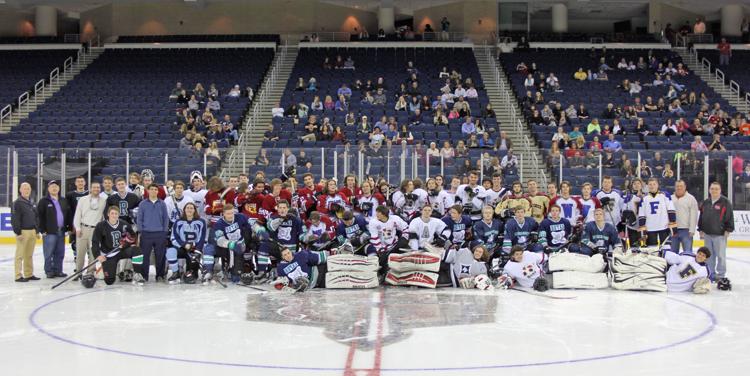 Players from the Georgia Student Hockey League gather after their annual senior showcase at the Infinite Energy Arena last year. The GSHL is celebrating its 20th anniversary season. (Special Photo)

Twenty years ago, a small group of hockey dads sat in one of the rooms at the Duluth Ice Forum and created a high school league from scratch.

Denis Stephenson and Gene Jarusinski are founding members of the Georgia Student Hockey League, which is about to begin its 20th consecutive season operating out of the rinks in north metro Atlanta. Both of them were just trying to find a way for their sons to represent their school in the sport they had vested much of their youth in.

“What made us think about it was we played street hockey and played against different neighborhoods,” Jarusinski said. “We play against the kids from two blocks over and we started building up rivalries.

“When we started (the GSHL), four of us were sitting there saying, ‘Hey, do you think we can make this happen?’”

Stephenson, the league’s original governor, was coaching at team out of the Ice Forum at the time.

“My son was playing on the (North Gwinnett) football team, but was really a hockey player and just wanted to be recognized in the high school environment,” Stephenson said. “I said, ‘We’ll start a league.’ We had kicked around the idea before, but we started talking to some of the fathers and came up with four teams — North Gwinnett, Duluth, Milton and Centennial.

“Once the word got out, then all of a sudden we had enough for eight teams.”

Roswell, Chattahoochee, Brookwood and a team dubbed Metro based out of Norcross were part of the original eight in 1999-2000.

“We didn’t know what to expect in the first days,” Jarusinski said. “Steven Roffalo sent out an email blast to get the interest out for our team’s first tryout, but we had no clue how many were going to show up. We had numbers to tape on the guys and we only had 20 numbers. We ended up having something like 38.

“We didn’t cut anybody, and it dwindled as the season went on, but it was neat to see that there was a big interest.”

The kids were on board, but they still had to sell the idea to the area rinks — carving out ice time is a challenge with house leagues and travel teams — and the high schools.

The owners of the rinks, Jack Burton and John Bardis, went so far as to offer free ice time for tryouts.

Getting the high school’s approval wasn’t nearly as straightforward.

North Gwinnett’s athletic director Chris Culpepper was instrumental in getting the ball rolling.

“He supported it and we sort of leveraged North Gwinnett with all the other schools,” Stephenson said. “By the end of the initial season, North agreed they could letter in the sport. That carried through to the other athletic directors.”

In order to get approval, the league had to adhere to GHSA rules, which meant not playing on Friday night or Sunday.

“It was challenging early on to get the support from the high schools, just to get their endorsement,” Jarusinski said. “They didn’t want to snub us, but on the other hand, it was ice hockey. It was a club sport, but for the kids, we wanted them to be able to wear their school name on their chest.”

It also wasn’t an easy ask for the parents, most of whom were already paying for their kids to play house and travel.

“The sport was — and still is — very expensive,” Jarusinski said. “But it was something different, being able to wear your high school jersey.”

The founding members did what they could to offset some of the financial burden.

“In Season 2, it grew like crazy,” Stephenson said. “We got the Atlanta Thrashers involved and had corporate sponsorship.”

They pitched the league to Northern Telecom, which provided $25,000 to get the teams rolling. The money was split among all the teams to help cover the cost of ice time and jerseys.

“The thing that was really neat early on was their classmates were actually coming to the games,” Jarusinski said.

Kids who were used to playing in front of mom and dad and grandparents suddenly had bleachers full of rowdy teenagers sporting school colors and banging on the glass enthusiastically.

“I can remember vividly how excited they were to play in front of a crowd,” Jarusinski said, “before, during and after the game. That was a big thing that made the league grow.”

By 2000-01, the GSHL had expanded to 14 teams with three divisions. Collins Hill, Harrison, McEachern, Pope, Walton and South Forsyth joined the fold for the third season. The league was able to add the rink in Kennesaw to the rotation and expanded the schedule from 10 to 16 games.

A year later, it was up to 22 teams in five divisions with a 21-game schedule. More than 400 players participated in 2001-02. Stephenson handed over the reins after three years, first to Randy Novak and then Don Stone, who has held them for the last 15 years. Stone started the Norcross team and now oversees Brookwood’s program.

“Don Stone is the miracle worker,” Stephenson said. “He’s absolutely kept it alive. Without him it would have been done. He was a critical guy.”

The league weathered the departure of the Thrashers in 2011.

“That hurt all hockey,” Jarusinski said. “But it speaks to the staying power (of the GSHL) and shows the strength of hockey in Atlanta.”

This season, 17 teams are playing in two divisions, including five from Gwinnett County (North Gwinnett, Brookwood, Mill Creek, Peachtree Ridge and Collins Hill). The league isn’t restricted to boys. North Gwinnett is among the teams with girls on its roster.

The season starts today and runs through February. The final event is the annual Senior Showcase at the Infinite Energy Arena in Duluth to honor the players who are graduating.

“Hats off to everyone involved — the kids and the parents,” said Jarusinski, who coached Peachtree Ridge to a state title. “Any time you start something new, you don’t know what to expect, but everybody was pulling the rope in the same direction.

“There was an inner drive to make sure this wasn’t a one-and-done thing. We were all happy it stuck. Here we are 20 years later.”